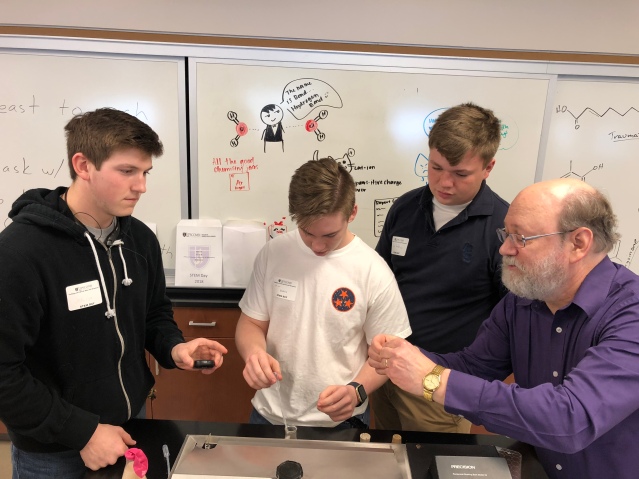 On Friday, February 23, a group of NCS juniors went to Lipscomb University for STEM Day. STEM Day is the day where Lipscomb invites students to come and learn about fields in science, technology, engineering, and math and shows off it’s STEM departments in the process.

Sam Bullock, a junior, said, “We learned about college and what Stem fields are like. They tried to make it look fun to get us to go there and consider a STEM career.”

Ben Simpson, a junior, said, “My favorite part of STEM Day was the chemistry lab with sugar and the origami we did in math.”

During the chemistry session, students were asked to sample glucose level in different beakers. They then poured yeast into the beakers and covered them with a balloon. After a while, the balloon were filled with air due to the yeast.

During the math session, Dr. Carroll Wells showed students how to create a folding dodecahedron, which is a fancy word for a 12 sided figure. He also showed off various ways of folding paper so that it did unexpected things.

It wasn’t all just classes however. During the lunchtime, students were treated to an unexpected surprise.

Nate Lewis, a junior, said, “I liked getting bisons thrown at me during the lunch.”

The scene Nate described took place when people from Lipscomb’s admission department surprised students assembled in the theater for lunch by throwing small foam bisons from the upper floor out to the students to catch.

Overall, the trip was a great way for the students interested in STEM to learn about what a major in that field might look like. It also served as a miniature college tour for potential Bisons.