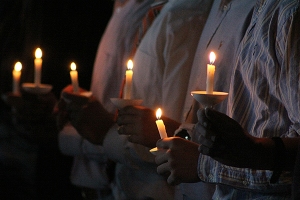 I walked in as part of the single file, alphabetical line that we had practised before. Just like last year, there was a white plastic funnel in my hand, designed to collect dripping wax. I sat on the same row of bleachers as last year, next to the same classmates as last year, each of them holding a white plastic funnel in their hands. The funnels each held a single wax pillar with a string wick, also white. The flame started on the far end of the gym. Each senior lit the candle next to them. When it got to me, it took a couple tries to keep my candle burning. The small flame kept being blown out by a small breeze or the wax beneath it. The crowd on the opposite stands chuckled slightly by my fourth attempt. Once that candle was finally lit, I lit the candle of my neighbor. Eventually, there were 19 little lights flickering in a row, each in a white plastic funnel.

There were many more candles on the other end of the gym, each being held by a junior, all of them unlit. It was our job to light them. One by one, a senior stepped up and then three to four juniors did as well. It seemed like a big deal over nothing. In the center of the aisle, the senior lit his or her chosen junior’s candles before walking past and sitting on the opposite side from where they started. Aside from the announcing of names and occasional comments on the differences in size between the two classes, the gym was silent during the affair.

It didn’t mean something to everyone. Many students were just there because they had to be, another ritualistic task they had to get through in this busy time of year. As I sat there near the middle of my line, watching the wax puddle down in the bottom of my white plastic funnel, I thought a little more about what this whole thing meant. My grandmother started this tradition back in 1991. That doesn’t seem like so long ago until you consider how many graduating classes that moved through in that time, how many students that gave their last goodbyes to their teachers before moving on to the next big step in their lives. Last year, I was having my candle lit by someone else, but now I’ve lit it for another group. My year is almost over, my last year. It’s off to college after this. Once we’re gone, the next class is going to take over as the top dog seniors of the school. We’ve already passed the torch.