Did You Know This About Chick-Fil-A? 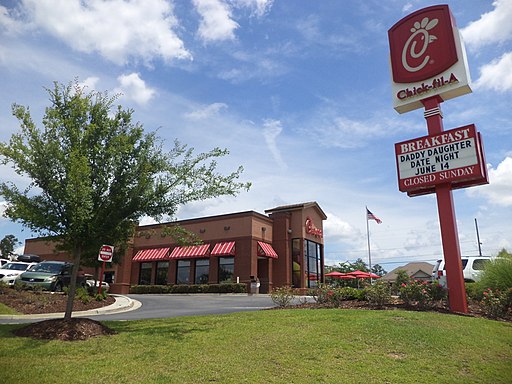 As we know, Chick-Fil-A is one of the best chicken selling fast-food joints of all time, but do you know how Chick-Fil-A came about? Chick-Fil-A was created by S. Truett Cathy in 1967. It was first opened in Atlanta’s Greenbriar Shopping Center, but after 19 years, Chick-Fil-A finally opened its first stand-alone restaurant.

As you might have noticed the annual Peach Bowl for football has started being sponsored by Chick-Fil-A. This began in 2007 and is known as one of the longest sponsorships for a college football bowl.

A Chick-Fil-A store makes an average of 3.1 million dollars a year. That is about 8,493 dollars a day. They have sold over 3 billion chicken sandwiches since opening. Chick-Fil-A is number eight on the chart of the most wealthy fast-food places. When working at Chick-Fil-A you can earn up to 13.00 dollars an hour. Overall, Chick-Fil-A is not only a tasty fast food place but a good one to work at for a starter job or just a job to make a few extra dollars.

As you may know, Chick-Fil-A’s logo is not a chicken—it is a cow. The purpose of this was to encourage Americans to eat more chicken and not beef. This logo was first seen on a billboard in Atlanta in 1995. The cows often hold signs saying funny things such as “Eat Mor Chikin”, “Mom Sez Eat Chikin”, or “Smart Peeple Eat Chikin”.

Dressing up will do what?

Whenever you are low on money or just want to dress up, dress up as a cow and head over to Chick-Fil-a. Yup, that’s right, if you dress like a cow you will receive free Chick-Fil-a!

1. The chicken biscuit was the first item on the breakfast menu.

3. The restaurant is closed on Sunday’s due to religious reasons.

4. The chicken recipe has stayed in the family for over 50 years.

7. The restaurant’s special “Chick-Fil-A” sauce is made up of three different sauces.

8. The company has sold over 3 billion sandwiches since opening.