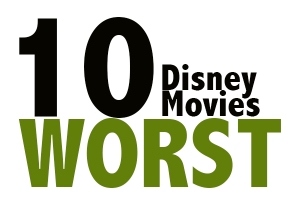 10. Pocahontas: This movie was a product of the dark days in Disney when even their big budget animated movies were no longer expected to be good. Movies like “Pocahontas” didn’t help to remove the stigma. The film was a critical failure, an insultingly inaccurate depiction of a true story in one of the darkest events in human history. The movie was so bad that Kingdom Hearts didn’t even allude to it’s existence in it’s mish mash of Disney classics.

9. Meet The Robinsons: A movie that no one asked for. It looks more like Disney executives found the ideas for this movie in Dreamwork’s trash than from an actual focus group. With a tired story that’s already been told in hundreds of different versions, and just about nothing else original about it, the movie got mixed reviews at the very best, critical murder at the worst. One thing that was truly unique about this movie was how quickly it was forgotten, and that’s definitely a good thing.

8. The Lone Ranger: Some movies make you laugh when you hear about their existance, then cry when you realize that they’re real. It’s hard to even imagine a way that this movie could have been successful. The Lone Ranger was certainly no longer relevant to audiences in 2013, it hadn’t been for the past seventy years, and Disney’s feeble attempt to dust off the franchise was shotty at best, a disaster at worst. Miscasting the pasty-white and goofy Johny Depp as a wise and tortured Native American may have been the first red flag that this movie was going to be terrible. It wasn’t just one of the worst Disney movies of all time, it was also one of the biggest box office bombs in cinematic history, making only 260 million out of it’s 225 million dollar production budget and 150 million dollar marketing budget. What else could be expected from a movie that was in production hell for eleven years?

7. A Kid in King Arthur’s Court: This movie played out like a rejected Nickelodeon TV special. Old English lore was absolutely degraded by “radical” 90s stereotypes, creating a mish mash of cliche’s and horrible writing. It doesn’t help that the child actors in this film appear to be rehearsing for their upcoming roles in a Tommy Wiseau film.

6. Planes: I’m not sure if I really need to explain why this movie was bad. Cars wasn’t really a very good movie. It had a few good moments, but not something I would consider noteworthy. Cars 2 was a disaster that could only entertain the youngest of children. However, even the youngest children alive couldn’t find enjoyment in Disney’s  “Planes.” Apparently, a Disney focus group decided that they had beaten the premise of talking cars into the ground long enough and it was time to move onto another type of vehicle. I only hope they’ll learn their lesson before they make a movie about talking boats.

5. Pirates of the Caribbean: On Stranger Tides: Many people thought that turning the hit movie “Pirates of the Caribbean” into a trilogy was a questionable move, but at least the trilogy was able to sufficiently entertain movie going audiences. The same can’t be said of the franchise’s awkward fourth installation. It didn’t help that more interesting movies like Marvel’s Thor were coming out at the same time as this stinker.

4. Beverly Hills Chihuahua: This one sounds like a joke, doesn’t it? It sounds like I just made this up to make you laugh at the ridiculousness of the idea. Well, I wish this was a joke. The fact that a movie called “Beverly Hills Chihuahua” exists means that we’ve already lost. Perhaps the worst thing about this critical failure is the fact that it had two straight-to-DVD sequels. That’s right. They didn’t just think this was a good idea. They thought it was such a good idea that they did it two more times!

3. The Haunted Mansion: After the unexpectedly massive success of “Pirates of the Caribbean,” Disney took the next logical step and decided to turn another famous theme park ride into a feature film. After that, they took a lot of not logical steps. The absolutely bizarre casting of Eddie Murphy in the lead role didn’t help the fact that the movie’s lack luster story had nothing original or captivating. The only somewhat entertaining thing about this flick is seeing Terence Stamp phone it in as the film’s villain, chewing the scenery in a way only he can.

2. Chicken Little: The problem with making a story about a children’s picture book is that when the source material has so little story, you have to start making a lot of things up. For example, did you know that the classic fable about a chick believing that the sky was falling is actually a story about aliens invading a humorless, anthropomorphic world? If you answered yes to that question, congratulations! You’re stupid enough to enjoy Chicken Little!

1. Home on The Range: You know what sounds like a good idea? Lets take some of the most talented animators of the early twenty first century and spend a small fortune to animate a story that would have been rejected from the back of a cereal box! Sound good? No? Well, too bad, they already did it. Home on The Range is a movie that no one wants to remember, a humorless venture into just how bad a children’s movie can be if you try as little as possible. For it’s sheer lack of effort and humor, this has to be the worst Disney movie of all time.